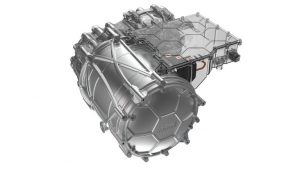 To remove the wear and drag associated with brushes, power to the rotating magnets is fed from outside world to the rotor across a rotating single-phase transformer in which the primary winding stays still and the secondary rotates. 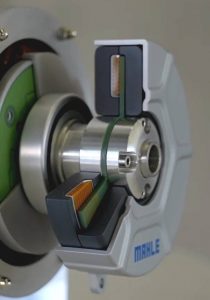 In the Mahle case (left), the wound primary and all magnetics for the transformer are stationary, and only the PCB-based secondary rotates. The whole thing is mounted out beyond the bearing at one end of the motor.

The primary is driven at kHz frequencies by a zero-voltage-switched power bridge supplied from the main battery, and power from the secondary is rectified by four spinning diodes before being fed to the field coils. Should four rotating diodes be thought to daring, there are two-diode options available by centre-tapping the transformer or splitting the field coil into two. No rotating capacitors are needed.

Having an electromagnet in the rotor gives the control electronics another knob to adjust on top of the stator winding currents, and rotor inductance is low enough for it to respond, for example, to driver acceleration commands.

Even with its coils and transformer, the rotor in the 140kW (peak) prototype is rated for over 20,000rpm.

The company is claiming “efficiency above 95% at almost all operating points – a level that previously has only been achieved by Formula E racing cars.” The company sees this efficiency stretching over most of the speed-torque curve, with the motor only loosing out in efficiency terms to induction motors only at the highest speeds with low torque, and only to permanent magnet synchronous motors at low speed with the highest torques.

Does the motor have any disadvantages compared with the permanent magnet synchronous motor?

“It’s a little bit heavier than a PMSM due to the heavy copper coils,” company spokesman Christopher Rimmele told Electronics Weekly. He sees his design costing less that a PMSM “since the magnet price is a significant part of the overall costs”.

And what about another no-rare-earth machine some are mooting for vehicles, the synchronous reluctance motor.

“This one has less torque, can’t handle overload and has a worse max output curve since the torque is crumbling by 1/n2 in the field weakening area,” he said.

To go along with its motor design, Mahle has developed computer aided tools to balances the conflicting demands of mechanical strength, thermal performance and electromagnetic properties.

Influencer Marketing for Small Business: How to Get Started