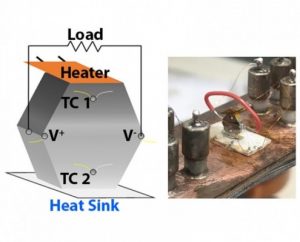 This is not the first time that ‘transverse thermoelectricity’ has been demonstrated but, according to the researchers, it is the first time it has shown notable efficiency.

It works when the internal structure of the Re4Si7 crystal is at a specific angle to the heat flow, causing electrons and holes separate and travel off in opposite directions at right angles to the heat – while in conventional thermoelectric generators the carriers move along the heat flow axis.

“This is the first time this kind of device has ever been shown to be feasible,” said chemistry professor Joshua Goldberger. “We showed that these materials are as effective as conventional thermoelectric generator technology, with efficiencies that are orders of magnitude higher than any previous transverse device. This compound is just as good as what you can buy commercially.”

Two years ago, the same team discovered unexpected properties, in a different compound, that allowed electrons and holes “to run along what might resemble a north-south highway for one charge and an east-west highway for the other”, according to the university.

After that discovery, the researchers combed through the research of other scientist that had been found crystals that did the same thing.

“We got interested in this because, at first, we didn’t realise it could exist,” said Goldberger. “When we figured out it could exist, we’ve been really pushing to find these materials.”

Now they have experimentally confirmed 15 materials with these properties, out of the over 110,000 internationally catalogued crystal structures.

“A few had been discovered, but none was exploited for functionality. What we have found is that we can actually do something with it,” said Ohio professor of materials science Wolfgang Windl. “All we have to do is put wires to one end and orient the crystal a certain way and suddenly we have a power generator with no moving parts.”

Ohio State worked with the University of Illinois at Urbana-Champaign.

SEPIC Converter based on MT3608 is open source