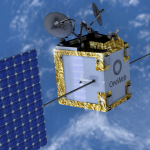 Arqit invented a method, called QuantumCloud to translate the benefits of this quantum key distribution to any form of endpoint or cloud machine without the need for any special hardware. The first version of QuantumCloud launches for live service to commercial customers in 2021.

Government customers typically have more stringent requirements for control and are more inclined to buy “Private Instances” of cloud technology rather than managed services.

Arqit has therefore designed a different version of its technology to meet this need and has recruited a partners from allied countries to collaborate in bringing the FQS system to use.

FQS has been developed with support from the UK Space Agency (UKSA through its National Space Innovation Programme). The system consists of dedicated satellites, control systems and QuantumCloud software.

It will be provided to the UK’s ‘Five Eyes’ allied governments and other international partners, allowing sovereign protection of strategic national assets and interoperability for joint operations.

The first FQS satellites are to be integrated and tested at the National Satellite Test Facility in Harwell near Oxford and are expected to be launched on Virgin Orbit’s LauncherOne from Newquay in Cornwall in 2023, after the launch of the first commercial Arqit satellites.

Best D&D soundtracks for every scenario: How to pick the perfect songs