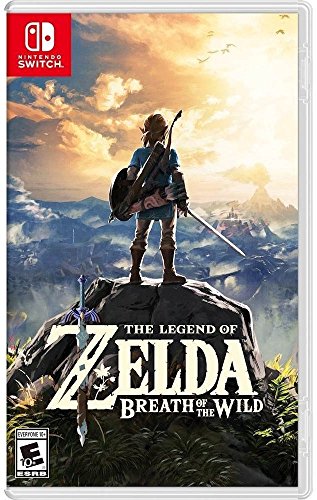 The Legend of Zelda : Breath of the Wild:
Woken from a 100-year slumber, Link must explore the wilds to regain his lost memories and save Hyrule. The wilds of Hyrule make for a puzzling game of survival. Climb cliffs to scope out a destination; then cross great distances with the Paraglider or the horses you’ve tamed. You’ll discover items for crafting, beasts to hunt, and plants to forage. So scavenge weapons and armor…or claim them from enemies! From hammers to helmets, many items come with unique stats, resistances, effects, and levels of durability. Use everything at your disposal to find and conquer more than 100 Shrines. Luckily, the in-game Sheikah Slate can project Runes that manipulate objects and enemies in clever ways. It’s time to forget everything you know about the Legend of Zelda series.

The Legend of Zelda : Breath of the Wild Expansion Pass:

The Legend of Zelda : Breath of the Wild game packs countless hours of play into a vast world of discovery. That makes it an ideal foundation for more adventures! Launching alongside the game on March 3, this $19.99 Expansion Pass grants access to three new treasure chests, “The Master Trials” DLC Pack and “The Champions’ Ballad” DLC Pack  both available now.

“The Master Trials”  includes the following:
The Master Trials pack includes the Trial of the Sword, Hero’s Path mode, Hard mode, the Travel Medallion, the Korok Mask, and 8 new armor items.Trial of the Sword: Defeat all enemies in 45 rooms to claim your prize. Begin the fight without armor or weapons and clear every room to awaken the Master Sword, so that it stays powered up.Hero’s Path mode: Hero’s Path mode tracks every step you take, so you can watch the last 200 hours of your journey unfold on the map, and use a slider to scroll through a timeline. This works retroactively, so players who have already started the game will also be able to use this feature.Hard mode: In Hard Mode, enemy “ranks” are increased (i.e. Red Bokoblins become Blue) and some enemies have higher ranks than ever. Enemies also slowly recover health and spot Link more easily. Floating platforms scattered around Hyrule contain both tough enemies and treasure.Travel Medallion: With the Travel Medallion, players can create a single warp point on the map at their current location. Link can then transport himself to that point at any time.8 new armor items: Hidden around Hyrule are eight new clothing items inspired by past entries in The Legend of ZeldaTM series, including clothing themed after fan-favorite games and characters such as Midna, Tingle, a Phantom, and the Legend of Zelda: Majora’s Mask game.Korok Mask: With the new Korok Mask, players will have a much easier time finding hidden Koroks. When equipped, the mask will shake if a Korok is hiding somewhere nearby.Further information about this content can be found below:

More adventures await in the Master Trials pack. In the Trial of the Sword, a resourceless Link takes up arms in 45 battles to awaken the Master Sword and keep it powered up. Hard Mode ups the challenge, Hero’s Path mode tracks 200 hours of footsteps on the map, the Travel Medallion creates a warp point, and the Korok Mask helps locate Koroks!

Further information about this content can be found below:
1. The Champions’ Ballad
A mysterious voice beckons Link to challenge the Divine Beast Tamer’s Trials. He must now prove himself by defeating enemies using the One-Hit Obliterator, conquering new Shrines, challenging a full dungeon, and overcoming many trials along the way. Once all challenges and trials have been bested, Link will obtain a new power known as the Master Cycle Zero!​
Additionally, the bard Kass is traveling Hyrule to complete the unfinished song his teacher left behind. As Link and Kass chase their respective goals, Kass will share new original songs he wrote capturing lost memories of the four Champions and Zelda, previously unknown to Link. But that unfinished song… What could it be?
*To play The Champions’ Ballad, you must first complete the Main Quest to free the four Divine Beasts. ​
2. 9 clothing items hidden in treasure chests
Items honoring the legacy of The Legend of Zelda series will be hidden in 9 treasure chests scattered across Hyrule, including the Island Lobster Shirt, Ravio’s Hood, Zant’s Helmet,
Phantom Ganon Skull, Phantom Ganon Armor, Phantom Ganon Greaves, and a Royal Guard outfit (complete with Royal Guard Cap, Royal Guard Uniform, and Royal Guard Boots).
3. Ancient Horse Gear​
The Ancient Bridle will increase a horse’s number of spurs while equipped. The Ancient Saddle will allow you to call your horse no matter how far away they are.
Both of these items will appear in treasure chests somewhere in Hyrule.​

Travel across vast fields, through forests, and to mountain peaks as you discover what has become of the kingdom of Hyrule In this stunning Open Air Adventure.
Now on Nintendo Switch, your journey is freer and more open than ever. Take your system anywhere, and adventure as Link any way you like.
Entertainment Software Rating Board (ESRB) Content Description: Fantasy Violence, Mild Suggestive Themes, Use of Alcohol

Be the first to review “The Legend of Zelda: Breath of the Wild + Expansion Pass Bundle – Nintendo Switch [Digital Code]” Cancel reply

Added to wishlistRemoved from wishlist 0
Add to compare
$6.99