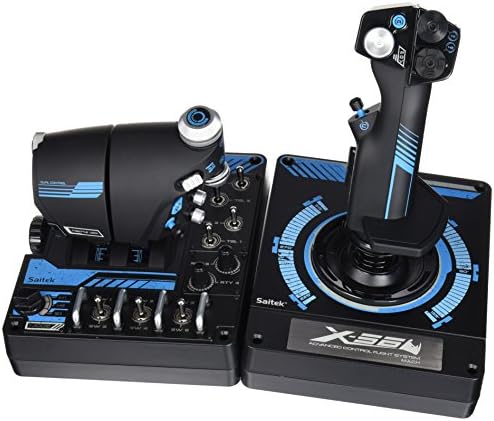 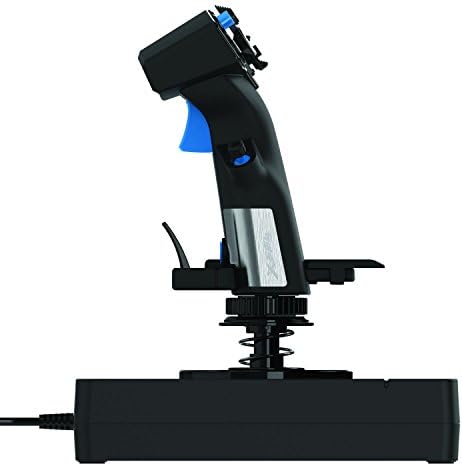 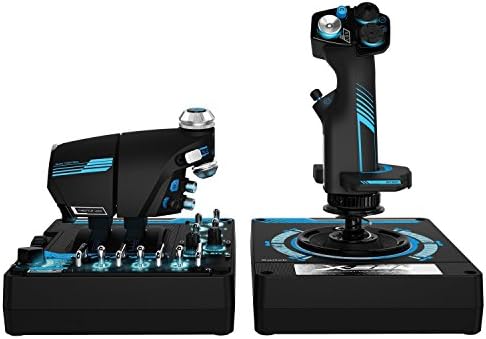 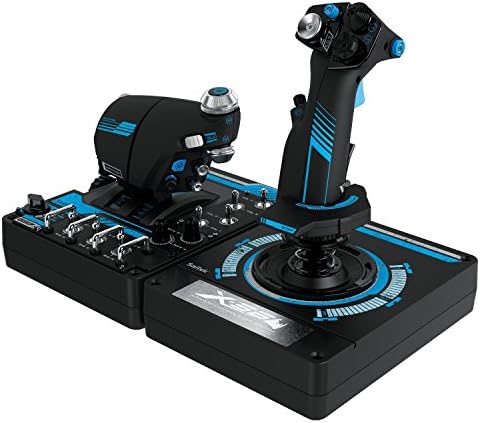 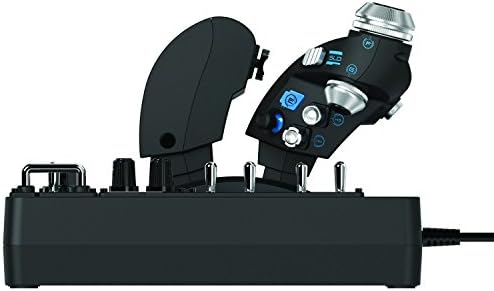 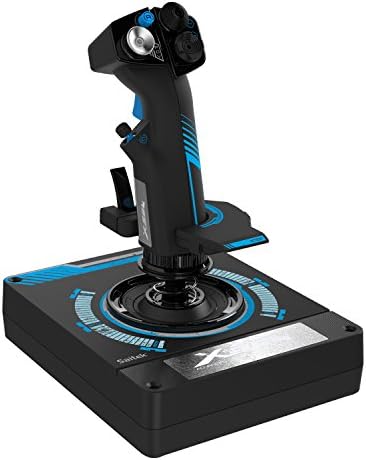 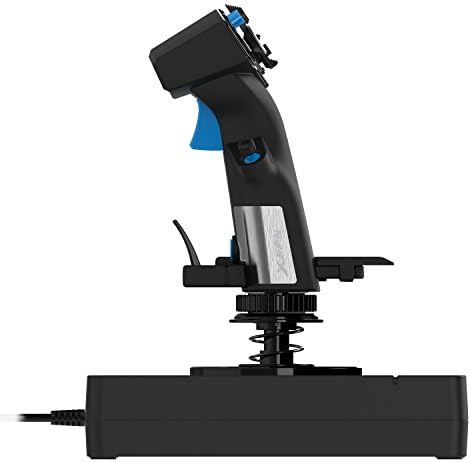 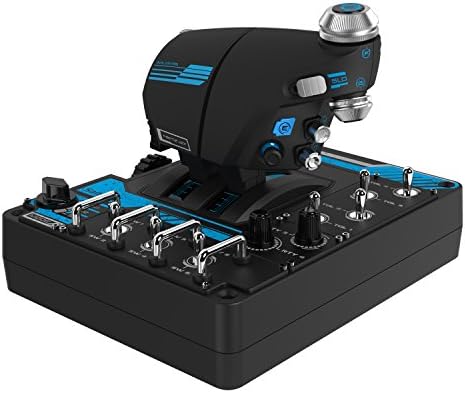 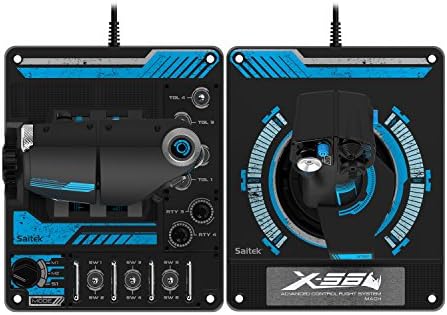 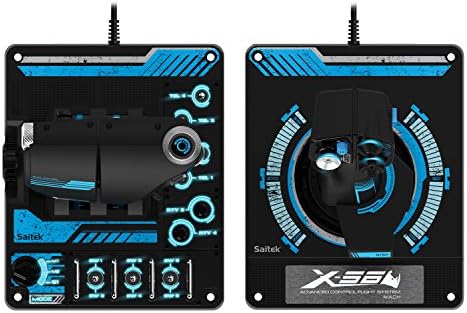 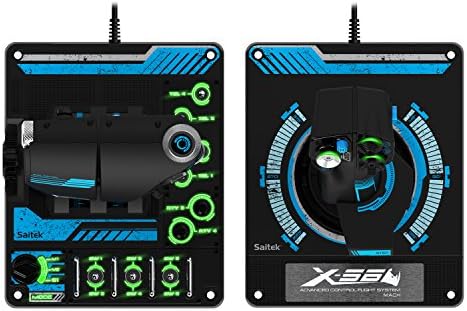 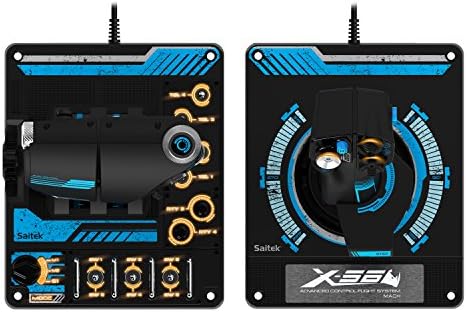 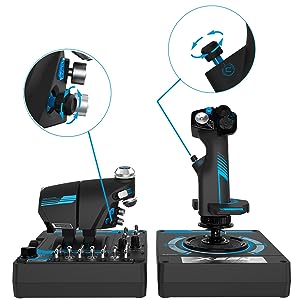 In modern space sims control is becoming more complex than in traditional atmosphere-based flight simulations, with many more inputs required to achieve true control of the space craft. Pitch, roll, yaw, backwards, forwards, up, down, left and right all need to be accounted for. With the addition of gimballed weapons that need to be controlled separately from the space craft, suddenly there’s a lot more control input required.

This is why the new mini analog sticks are required; providing four more axes of control. Assignable to any in-game axis function, or programmable using the included H.U.D. software, running out of control options is no longer an issue.

Many PC peripherals now feature RGB backlighting and the X-56 is no exception. Use the software to set the colour of the lighting to match the rest of your gaming rig.

Piloting whilst using VR is a great experience but can prove difficult because you can’t see your own hands, which can make finding the controls you need problematic. The X-56 places controls perfectly under your fingers where subtle distinctions in button feel and shape help you navigate the control set with ease. Even the switches on the base of the throttle are staggered or separated so telling them apart from feel alone is possible, leaving you free to concentrate on the immersive VR experience. 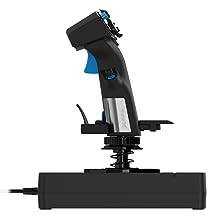 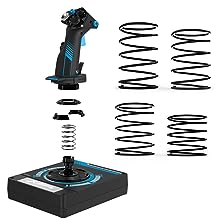 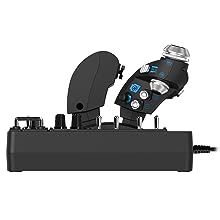 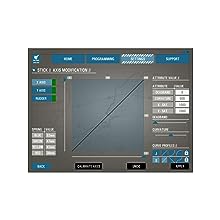 During virtual flight – just like true flight – the accuracy of an aircraft’s control surfaces is of paramount importance. The X-56 Rhino’s control surfaces are incredibly accurate, courtesy of a 16-bit aileron and elevator axis, each employing hall-effect sensors. Developed from the ground up, Saitek’s 16-bit axis solution enables extremely precise flight.

A ground-breaking, adjustable stick spring system allows pilots to alter the force required to move the stick. Four springs of varying resistance are included to provide a total of five different options. Choose the spring – or no spring at all – which best accommodates your style of flying.

Using a twin-engine throttle controller is the only suitable method for manipulating a virtual twin-engine aircraft. The X-56 Rhino boasts twin throttles – ideal for situations in which your primary engine is disabled and you’re down to one – and also provides the option to adjust the friction required to move them. And if your aircraft of choice is single-engine, a handy throttle lock effectively converts the twin throttles into a single unit.

Saitek’s software provides the ability to completely customize all of the X-56 Rhino’s axes and buttons. On the axis side, you can adjust deadbands and response curves to fine-tune axes to respond just like an aircraft’s real-life counterparts. On the buttons and toggle side, you can assign any number of in-sim commands, such as afterburner, Frame Shift Drive, target lock and weapon group firing. The software also allows programmability for an array of mouse and keyboard commands – from basic single-key inputs to very advanced, timed, and macro commands.

Military-grade Space and Flight Sim Precision: The X-56 Rhino delivers a multitude of customizable options including all the control surface options required to achieve the exact level of performance that aspiring combat pilots demand
New Mini Analog Stick Control Surfaces: Control pitch, roll, yaw, backwards, forwards, up, down, left and right as well as gimballed weapons that are controlled separately from the space craft
RGB Backlighting: Many PC peripherals now feature RGB backlighting and the X-56 is no exception. Use the software to set the color of the lighting to match the rest of your gaming rig
Ideal for VR: The X-56 places controls perfectly under your fingers where subtle distinctions in button feel and shape help you navigate the control set with ease.
Fully Featured HOTAS: Accurate 16-bit aileron and elevator axis with hall-effect sensors. Adjustable Stick Force via Advanced 4-Spring System. Twin Throttles with Friction Adjuster and Throttle Lock

Added to wishlistRemoved from wishlist 0
Add to compare
$159.99