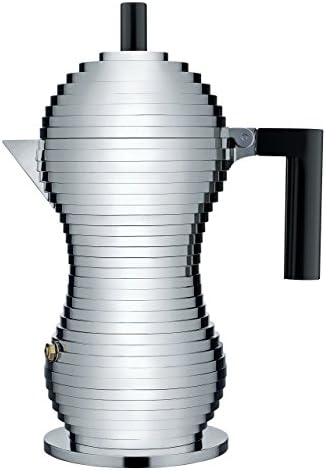 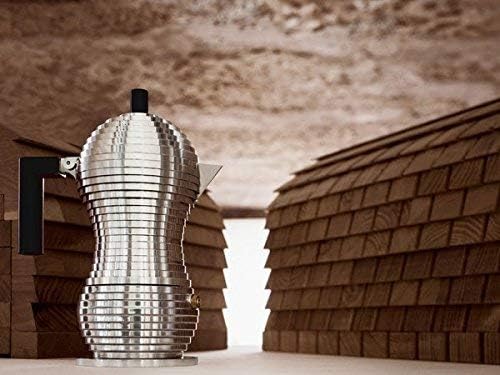 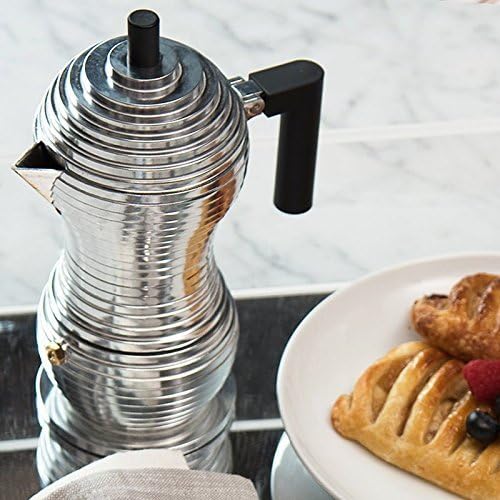 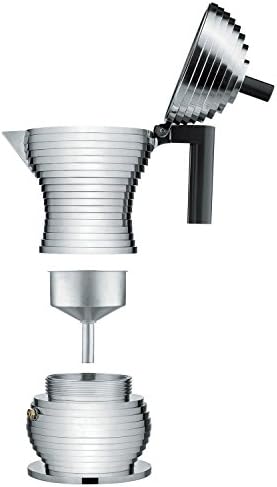 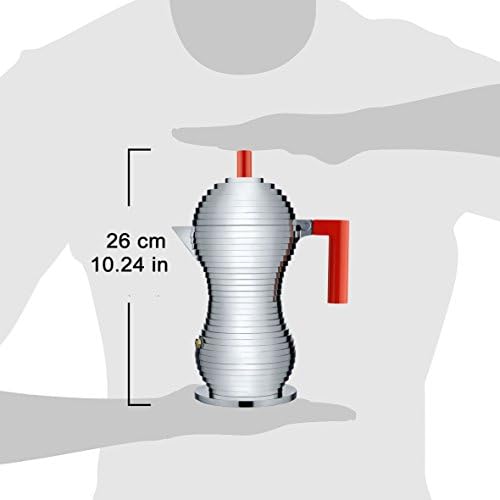 Pulcina comes from a research entirely dedicated to the design and functionality of the espresso coffee maker. As a result of this study and the application of the technology developed by illycaffè, Pulcina is a high performance coffee maker with a boiler that stops dispensing the drink at the right time before the coffee gets a bitter aftertaste. This helps to enhance the full and rich aroma of this drink. The spout has been designed with the same attention to functional aspects: when pouring coffee, its special V shape, which recalls a chick’s beak (hence the name of the coffee maker) allows it to perfectly stop the drop. The handle and plastic knob in colours black and red complete the coffee maker.

Architect. Michele De Lucchi was a prominent figure in movements like Cavart, Alchimia and Memphis. He designed lamps and furniture for the most well known Italian and European companies and realized architectural project in Italy and abroad. His work has been exhibited in Europe, the United States and Japan. He was appointed Officer of the Italian Republic for services to design and architecture and has been nominated Professor at the Design Faculty of the Politecnico of Milan and Member of the Accademia Nazionale di San Luca in Rome. He has recently realized a number of proejcts for the city of Milan: the pavilions for Expo 2015 (Padiglione Zero, Expo Center, Intesa Sanpaolo), UniCredit Pavilion in piazza Gae Aulenti and the installation for the Pietà Rondanini at the Ospedale Spagnolo at the Castello Sforzesco. For the Salone del Mobile 2015 De Lucchi has created “La Passeggiata” for Workplace3.0, dedicated to his vision of workspace.

Founded in 1921 as a “Workshop for the processing of brass and nickel silver sheet metal, with foundry”, Alessi has always stood out for the high quality of its products.

In almost a century of history, the company has gradually evolved to become one of the leading “Factories of Italian design”, capable of applying its expertise and excellence in design management to many different product types.

Open to change and international development, Alessi at the same time has a strong bond with the traditions and cultural background of its area and continues to be synonymous with handcrafted objects produced with the help of machines.

Alessigraphy: the geography of Alessi production

Since the Company’s foundation in 1921 the majority of Alessi products have been manufactured through the cold working of metals, a tradition that is kept alive today by the skilled workers at the Crusinallo plant in Omegna.

Over time, Alessi also began to work with many other materials, such as porcelain, glass, wood, and plastic… A specific production method was developed for each one. Even when production takes place outside the Crusinallo plant, Alessi’s guidelines guarantee the company’s original production quality standards, continuing to reconcile industrial technological complexity with an artisanal eye for detail.

The objects produced from the different materials are manufactured in various production plants across the world. They remain original Alessi objects in that they are conceived with the same design excellence and produced with the same attention to quality that sets the company’s products apart.

Added to wishlistRemoved from wishlist 0
Add to compare
$249.00