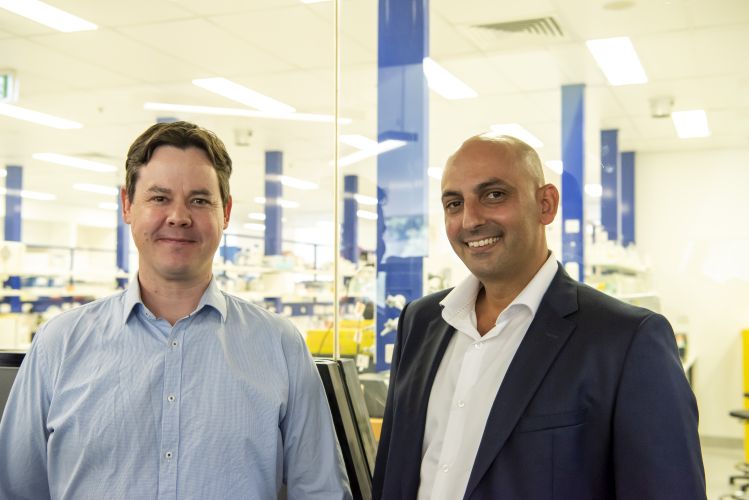 As firms such as Motif FoodWorks have observed​​, hard fats such as coconut oil – which are typically added to plant proteins post extrusion – are not distributed throughout plant-based burgers in the same way that fat is distributed in animals, plus they have a tendency to leak out during cooking and impart a coconutty smell.

“Specialty fats such as coconut are being added to plant-based meats for particular functional or mouthfeel purposes,” ​said Dr. James Petrie, co-founder and CEO at Nourish Ingredients​​​, which is based in Canberra, but plans to target the North American market.

“The problems is, they don’t resemble animal fats closely enough, in terms of their performance, mouthfeel, flavor and aroma,” ​Petrie told FoodNavigator-USA.

They are also in limited supply, added Petrie, a crop metabolic engineer who worked as a research scientist at Australia’s national science agency CSIRO before co-founding Nourish​ ​with Ben Leita in early 2020.

“Sustainability is critically important for meat and dairy alternatives. ​If you look at how much coconut plantation there is around the world, there is no way that that is going to scale up to the sort of volumes that everybody hopes plant protein will scale to, unless you turn coconut into a palm oil 2.0 ​[palm oil has been widely linked to deforestation].”  ​

If you want to make animal fats, bio-identical ‘animal-free’ animal fats, or completely novel fats that behave like animal fats, all without killing animals, you can genetically engineer plants  or microbes such as yeast, or you can make cell-cultured fat (by growing real fat cells in a bioreactor like Mission Barns​​), said Petrie. And all three have pros and cons.

“I think there are going to be some applications where cell-cultured fat is a fine solution, it all comes down to what’s the right type of fat to be paired up with the new types of protein that are being used to build these foods. W​hen people bite into plant-based protein, cell-cultured meat, or ​recombinant protein​​ [made using engineered microbes], the fats must be tuned to those specific proteins.”​​

‘Plants are close to unbeatable in terms of production costs, but they take a long time to engineer’​

From an efficiency perspective, “Plants are close to unbeatable in terms of production costs, but they take a long time to engineer​,” said Petrie, who was a part of a team at CSIRO developing canola plants engineered to produce the kinds of long-chain omega-3 fatty acids only found in marine sources such as algae, krill, and fish.

“We learned a lot from that, including that plants can be exceptionally good platforms to make these animal-mimetic lipids, but they take a really long time to build, and the industry needs solutions before that. ​

“Using yeast​ [to produce customized fats], it almost feels like we’re cheating in a sense, because it happens so fast compared to plants​.”

Put another way, he said, if you engineer yeast to make certain target molecules, you can get results pretty rapidly, learn from your mistakes, and quickly return to the drawing board. With plants, you have to wait for weeks and months before you can see the fruits of your handwork.

But are microbes efficient at producing fats at scale? Unlike companies using microbes to produce proteins, where yields can be a challenge, he said, “We are in the somewhat enviable position of having oil-producing organisms already out there that are already up there in terms of yield, and so the challenge for us is less about increasing the yield and more about tuning the type of fat that’s being produced.”​

‘We’re tinkering with quite a few oil-producing microbes’​

He added: “We’re tinkering with quite a few oil-producing microbes. We can produce mimics ​[animal- or animal-like fats, without animals], but the more exciting frontier is building new fats, fats that have not yet been built or have not been cultivated in high enough quantities to be useful. ​

“And so we’re making drop-ins that are similar enough to existing animal fats to be useful immediately, but we’re also chasing down new fats. You might think, OK, if you’re making a ​[plant-based] ‘cow-meat’ product, then you need cow fat, but the protein in plants and cows is very different, and so the fat really has to be tuned to the protein you’re using.”​

So is Nourish looking to replace all of the fats in a plant-based formulation, or just, say, coconut oil?

“We don’t have all those answers yet,” ​said Petrie, “But we’ll probably leave the commodity components in plant-based meat formulations alone, canola or soy for instance, because those are low price ingredients. We’re looking to replace specialty fats such as coconut oil or coconut butter that give mouthfeel and cooking performance.”​

It’s early days for Nourish Ingredients, which was founded in 2020 and raised $11m in a funding round co-led by Horizons Ventures and Main Sequence Ventures earlier this year. But the plan is to “produce both meat and dairy fats,” ​said Petrie.  ​

“We’ve been doing deep dives with certain customers to understand their challenges.”​

Right now, he observed, “We’re a seed phase company so we’re somewhere between the lab and having commercial products, so we’re building demos and testing technologies out at larger scale, but we’re not yet scaled up.”​

As for the business model at Nourish Ingredients, he said: “We’re a b2b company​ focusing on specialty liquid products.”​

From a go-to-market perspective, Nourish’s initial primary focus will be North America, although it also has southeast Asia and Europe in its sights, which all have different regulatory frameworks.

When it comes to trying to explain to the media and investors what Nourish is doing, he said, “We’re probably more analogous to the Perfect Day type product​ ​​[dairy proteins and fats made via engineered microbes] than Mission Barns​ [animal fat grown from animal cells].

“So with Perfect Day you have recombinant fermentation production of an animal protein that is then going into an animal free food and I think that’s quite akin to what we’re doing.” ​

On labeling (what do you call animal-free animal fats, for example), it’s an open question that Nourish is wrestling with, but has not yet nailed down, he said: “It’s an industry wide question​​: What’s the best way to refer to a fermentation derived product?”​

To Get Closure From Your Ex, Here's What To Say