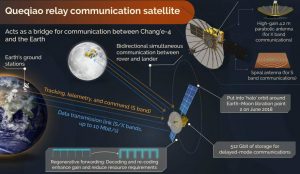 Needed because the lander is on a part of the Moon which does not have direct line-of-sight with the Earth, Queqiao has been placed in orbit around the second Lagrange point in the Earth-Moon system.

Lagrange points are gravitational coincidences around two bodies that orbit one-another, where a third small body can ‘hover’ with respect to the other two.

As an aside, Lagrange points L4 and L4 are so gravitationally benign that random space objects collect there.

Queqiao uses L2, a point beyond the smaller object – the Moon in this case, on the Earth-Moon axis, called EML2.

At an L2 point, an object is effectively sitting on a gravitational peak and will gradually drift away if left to its own devices, so some fuel is needed for station keeping.

It is possible to orbit L2, again with some station-keeping, and that is what Queqiao does, in an orbit that can see past the Moon and on to the Earth.

The designers picked an orbit that is between 47,000 and 79,000km from the Moon, and takes 14 days – an orbit that gives continuous coverage with one satellite at the expense of long distances.

The link to and from the rover and lander on the Moon surface operate in X band (7-8GHz). To ease the communication power burden on the lander and rover, the satellite has been equipped with a high gain (44dBi) 4.2m parabolic antenna.

Two 20W amplifiers feed the dish through a diplexer and three receivers retrieve lander and rover signals through a matrix switch.

All communications: telemetry, control and science data use the same link.

For back-up, there is an option to use X band through the dish for the Earth link.

Regenerative forwarding is used on Queqiao, rather than transparent (‘bent pipe’) forwarding, to provide extra Earth to Moon gain – up to ~7dB is available through coding. On-satellite data storage is provided for times when no Earth station is visible.

Queqiao is based on DFH Satellite’s CAST100 small satellite platform. Its triple-junction GaAs solar cells provide up to 780W, which can be stored in a 45Ah li-ion battery.

A review paper: ‘Development and prospect of Chinese lunar relay communication satellite‘ published in Space: Science & Technology gives an overview of the orbit, attainment of the orbit and the comms system.

The paper also discusses link options for future lunar far-side and south pole missions – including the challenges of a mission to the south pole’s largest crater which is likely to need multiple relay satellites to maintain constant communication.

“A sustainable communication and navigation infrastructure should be established to benefit all lunar missions rather than dealing with each mission independently,” according to Dr Lihua Zhang, author of the paper and DFH Satellite chief designer on Queqiao. “This infrastructure should adopt an open and extensible architecture and provide flexible, interoperable, cross-supportable and compatible communications services, which are critical to the success of future lunar explorations.”

Amongst his suggestions are shifting to Ka band RF or optical communications to increase bandwidth to the lunar surface.