Cytron recently launched their second RP2040 board, the Maker Pi RP2040, designed for robots or motion-controlled applications. With this new RP2040 chip, you can now build your own interactive robot, the Otto DIY robot. The Maker Pi RP2040 combines the Raspberry Pi Pico with the Maker series goodness, as well as a robot controller and other features. It is a compact board with an RP2040 SoC featuring a dual Cortex-M0+ processor. The SoC operates at 133 MHz frequency and comes with a 264KB internal RAM and 2MB flash memory.

For getting started with this project, you’ll need to be familiar with RP2040 and Maker Pi Pico boards. The onboard Maker Pi RP2040 comes with a 2-channels DC motor driver (H-bridge), which can control two brushed DC motors or a single unipolar/bipolar stepper motor. The motor driver can be tested without writing any code by using the two quick test buttons and motor output LEDs.

Discussing further, the onboard features four servo motor channels, with the voltage of both DC and servo motors being determined by the board’s power source voltage. With automatic power input selection, the controller board and motor, however, require the same input power supply, which may be supplied through USB, LiPo/Li-Ion battery, or the Vin (3.6-6V) terminals. When the battery is overcharged or over-discharged, the single-cell LiPo/Li-Ion charger onboard protects the battery. 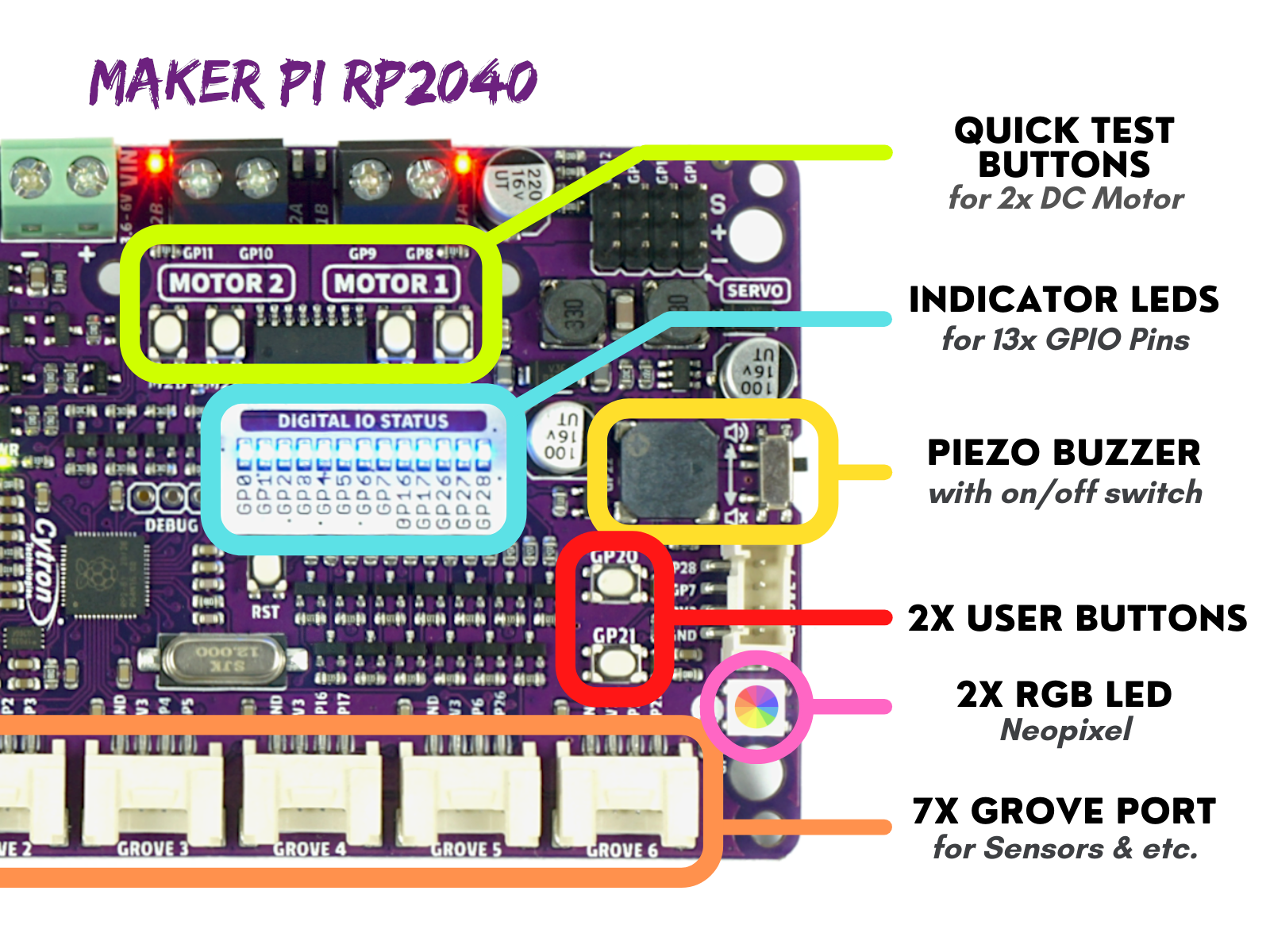 Additionally, unlike the Maker Pi Pico, this board allows you to control the power supply from all of these sources by using a power ON/OFF switch, and also it doesn’t offer you access to all of the GPIO pins. The status of 13 GPIO pins is shown by LEDs on the board. It features several LEDs that are handy for troubleshooting and creating visual effects.

The piezoelectric buzzer can be used to play a tone and a Buzzer mute switch to mute the piezo buzzer. In addition, it has 7 grove ports that support digital, analog, I2C, SPI, and UART for flexible connectivity. The user program has access to two programmable push buttons. These pushbuttons will detect your touch when you press them. Moreover, there are two user-programmable NeoPixels RGB LEDs. The NeoPixels are programmable allowing the user to indicate various parameters depending on the application.

Furthermore, for programming, like Maker Pi Pico, by default the board supports CircuitPython, making it simple for beginners. Other programming languages like MicroPython, Arduino, and C/C++ are also compatible with the board. If you have already worked on Raspberry Pi Pico, then it won’t be difficult to play with this hardware. This Pico-specific software, firmware, libraries, and resources should also work with Cytron Maker Pi RP2040.

The board comes with a form factor of 88 x 64 x 13mm and currently retails for $9.90 only. To learn more about Maker Pi RP2040 you can refer to the official product page or on Seeed Studio. All the technical specifications and images used are taken from the product page.

UK and US agree science and technology partnership

30 Polished Comfortable Outfits That Are Secretly Loungewear & Under $35