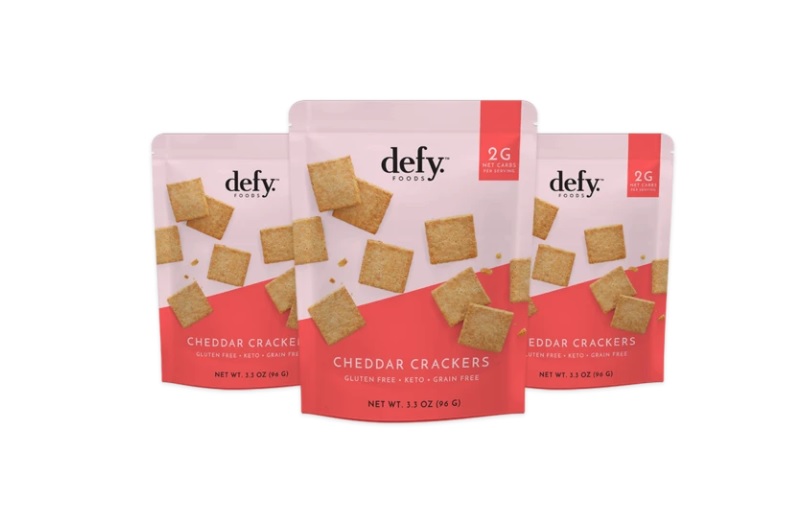 As avid followers and evangelists for the ketogenic diet long-before it was trendy, Suzanne Ryan and Jessica Weingarten know how hard it can be to stay in ketosis (burning fat not carbs for fuel), especially when on-the-go, crunched for time or simply craving a carbohydrate-heavy, non-compliant food – like crackers – which is why they launched Defy Foods last year.

“The idea for Defy Foods really came from a need as a consumer,”​ said Weingarten, who explained that when she and best friend Ryan first adopted the keto diet eight years ago “it was rare for someone to know what we were talking about, and there definitely were not products out on the market and there wasn’t a lot of convenience. So, we were doing a lot of cooking and trying different recipes.”​

And while they had fun cooking together, Weingarten said, “we’re both busy moms and work full-time and we wanted something we could buy off the shelf that was good quality ingredients, offered that convenience factor and still taste good. So, that was the inspiration and starting point for Defy Foods.”​

The young company’s first product – cheddar crackers – launched direct-to-consumer in March after conversations with other keto dieters revealed a “resounding need for something crunchy that could satisfy as a snack,”​ said Weingarten.

“There are all these really great dips that you can have on the keto diet, but then nothing really to dip in them unless you’re going with a pork rind or celery, and sometimes you just don’t want either of those – you want a cracker,”​ Ryan said.

She acknowledged that unlike eight years ago, today’s marketplace is quickly filling with packaged products making keto claims, but she said Defy Food’s Cheddar Crackers standout from the competition because its clean ingredients, including an almond base and egg whites, meet the diet’s macro nutrient requirements without sacrificing quality.

‘There are certain ingredients that people do and don’t want’​

“One of the things that a lot of people who aren’t necessarily in the keto space don’t fully understand is that there are certain ingredients that people do and don’t want,”​ she said. For example, she said, “keto really does focus on ensuring you’re having healthy fats”​ and highly processed vegetable oils, which are common in packaged keto products.

She also noted that keto followers don’t want certain sugar alcohols that may spike their blood sugar or kick them out of ketosis.

“A lot of the companies that are just trying to jump on the bandwagon and are slapping keto on their products”​ have these undesirable ingredients, Ryan said. Fortunately, she added, “consumers are really smart now and they’ll look at the ingredients and say, ‘No, I am not going to buy this.”​

She also noted that many keto-followers regularly test their ketone levels and their blood glucose and if they find a product that is labeled as keto or keto-friendly compromises their levels they will call them out on social media.

“My hope is that a lot of these companies will pivot when they start being called out and they will learn how the different ingredients effect people and that the ingredients are just as important as taste,”​ Ryan added.

To ensure Defy Foods crackers and future products support consumers’ diet goals, the company works with Ketogenic Certified to test the product on individuals with a variety of dietary requirements to ensure they do not spike glucose levels or compromise ketosis, Weingarten said.

Ryan adds the certification also helps Defy Foods standout from the competition by providing a level of transparency and trust that is needed in the keto market.

“It is definitely frustrating when you see companies that don’t have god ingredients put a keto label on their products, but … the Ketogenic Certified process really helps people know that for sure this specific product is safe to eat”​ while following the diet, Ryan said.

She believes that as the keto space continues to mature certification will become table stakes, just as it has for other diets, like paleo and Whole 30.

While only a small percentage of Americans currently adhere to the keto diet, Ryan and Weingarten believe as more trustworthy products that are certified make compliance easier the diet will gain followers.

They also note that their brand appeals to more than just keto followers to include paleo, low-carb and anyone who wants to eat more nutrient dense options – giving them a broad reach and plenty of room to grow.

For now the brand will focus on its cracker – gaining distribution, increasing supply and launching new flavors – but the duo sees high demand for products across categories, giving it lots of flexibility to expand in the future.

Sex and Intimacy Without Erections