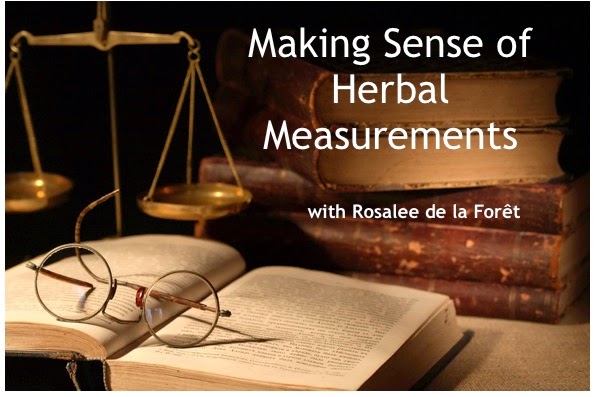 There are so many facets to studying herbalism.

Besides
learning about the herbs themselves we also study strange terminology
like carminative and expectorant, and even energetic ways of
understanding disease and tissue states such as dry/damp, hot/cold.

Then there is the art of medicine making, which is a whole other avenue of study.

This
article is about navigating your way through understanding the
different measurements commonly used in herbal medicine making.

Most
people in the US are familiar with culinary or baking measurements such
as 1/2 teaspoon of baking soda or 3/4 cup olive oil.

But in herbalism we use a variety of measurements that you may not be familiar with.

The good news is that, once they are explained and you have the right tools, they are really simple.

Weighing by Volume vs. Weight

Most
culinary ingredients are measured by volume. In the US the Imperial System
of measurement is commonly used. These are things like teaspoons,
tablespoons, cups, etc.

But herbs, and other common ingredients in herbal recipes, do not always have a uniform shape.

If
you and I both harvest and dry dandelion roots they may look very
different. Maybe you cut yours up into super tiny fragments while I
leave mine in larger chunks. This difference in size means that if we
measured those by volume we could come up with two very different
amounts.

In
the photo below I measured out shredded astragalus and cut astragalus
using the same sized spoon. You can see how big of a difference there is
between the two. 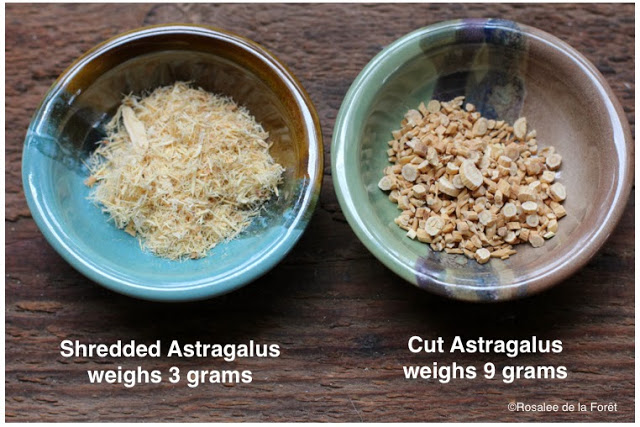 Measuring
oddly shaped things is just not accurate. This is why most things you
buy in a box in the store state on the label something like, “Contents
are measured by weight not volume.”

I
have heard beginning herbalists complain that measuring things by
weight is complicated. It may be different than what someone is used to,
but it is often more simple than weighing by volume.

In comparison, measuring beeswax by weight is very simple and much more accurate. 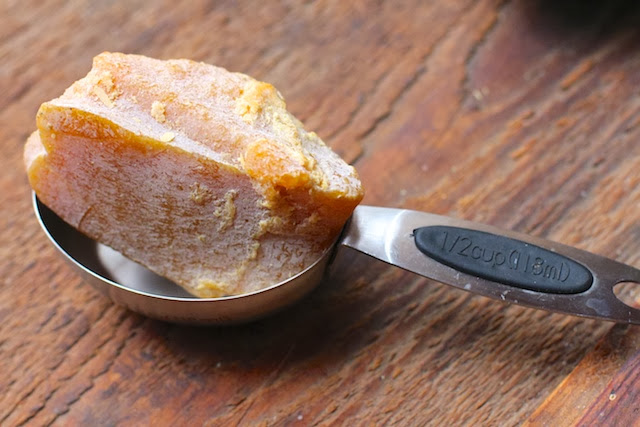 On the impracticalities of measuring out beeswax by volume.

Granted,
when making up your favorite pot of tea you don’t need to be precise in
your measurements. A handful here and a pinch there can produce a
delicious pot of tea. I’m certainly not advocating for precise measurements when you have a lot of experience and/or intuition on your
side.

However,
when you want to share those favorite recipes, measuring really helps!
When I publish recipes I want the most accurate measurements possible so
that people get a reliable result.

Can
you imagine how bothersome it would be if I published a recipe that
said, “throw a bit of kava in, followed by a bit more cocoa; once it
seems done add a good amount of vanilla extract”?

The only thing I routinely measure by volume is liquids such as alcohol, tincture formulas, oils and aloe vera.

Everything else I weigh using this scale.

If
you grew up in the U.S. then you are probably most familiar with the
Imperial Measurement System, which includes measurements like inches,
ounces and pounds.

Only
three countries in the entire world use the Imperial System of
measurement (Myanmar, Liberia and the U.S.). The rest of the world uses
the metric system.

Herbalist jim mcdonald likes to proudly stand in favor of the Imperial System, and maintains his positions with humorous remarks such as, “The metric system is the measuring system of the Borg.” If you are ever looking for cheap entertainment, strike up a pro-metric system conversation with jim. It’s pretty funny.

However, I often choose to use the metric system because I find it to be both simple and practical.

For example, the metric system is a lot easier to use when measuring small amounts of herbs.

I
also like the ability to easily communicate recipes with the rest of
the world. I have many readers from the UK, Australia and India, where
the metric system is used.

Perhaps
jim is right and the metric system lacks poetry. There is something
romantic about discussing weight in stones or distance in leagues.

But the metric system is super simple and practical, two things I favor.

How to Measure in Parts

Measuring in parts allows the user to determine how big or how little their batch is going to be.

When measuring in parts you simply choose the size you want your part to be.

Here’s
an example of a chai recipe given in parts then converted to recipes by
volume and by weight. There is a bit of a difference due to the
limitations of volume measurements, but generally in tea blends like
this precise accuracy is not needed.

Herbalist 7Song has a pdf on using parts that goes into this a bit more deeply. You can see that here.

How do I measure by weight if I don’t have a scale?

Unfortunately you can’t. You’ll need to buy a scale. These are found fairly easily at cooking stores.

I bought this one on Amazon several years ago and I use it practically every day. It works great.

How do I convert ounces to grams (or vice versa)?

Many digital scales allow you to switch between grams/ounces. My scale does this with two pushes on a button.

There
are also numerous online conversion tools. For example, if you go to a
google search bar and type in “9 grams to ounces” it immediately
converts it for you.

Whether
you use the Imperial System, metric system, or the handful system,
there is no one right way to measure. No matter what jim says about the
metric system. 🙂

However,
I hope this article helps you to understand different measurement
systems and why an herbalist might choose one over the other.

If you have more questions about measuring please post them in the comments and I’ll do my best to answer them.

Prior COVID Infection May Shield You for at Least 10 Months