We continue the series on how to formulate using examples of Lost Empire Herb’s formulas to show why they’re as they are. 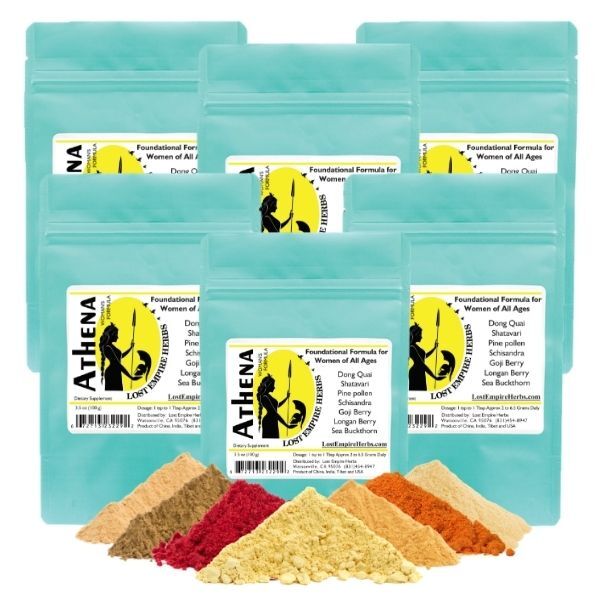 The “design spec” if you will of this one was to be a foundational formula for women that did a little bit of everything. In the typical Lost Empire Herbs way, this has a big focus on hormonal health. (In the end hormones interact with just about every other system.)

With any formula you need to have some aim you’re going for, so it is best to be clear on that from the beginning.

Athena is one of our most complicated formulas, featuring seven herbs which include:

This formula started from a duo that I read about and was a little familiar with. In Ayurveda, Shatavari is considered the #1 woman’s herbs. In Chinese Medicine, Dong Quai is the #1 woman’s herb. And this duo works well together through different mechanisms.

While Dong Quai has hormonal actions, it doesn’t appear to have direct hormonal compounds. Instead, it is seen as a Qi/Blood tonic.

But Shatavari is full of phytoestrogens. It was based on this, and knowing that many women have great results with Pine Pollen, that that got added in. In Athena the phytoestrogen component is balanced with phytoandrogens, delivering even more helpful hormone action.

This triplet is powerful in its own right. To this are added four different berries. The Goji and Schisandra already covered, but also Seabuckthorn and Longan.

Again, we see wide ranging actions through these berries. Longan in particular, I’ll mention as being a Shen herb that assists in mood and more.

In addition to adding a wide range of benefits, the purpose of the berries was two-fold. It also makes this formula taste better.

In my experience on average guys will take the worst tasting things as long as it delivers results. (Thor’s Hammer being a prime example!) On the other hand, women tend to be a bit pickier about taste.

Athena tastes better. Many have told me it doesn’t taste good…but better with those berries in there.

Taste, if you’re dealing with powders, teas and even tinctures, is an important factor in formulation. Of course, it doesn’t matter as much with capsules, excepting that the taste clues you in to the actions of the herbs and sometimes things work better when you taste them.

(For those that still find this taste off-putting Athena will be available in capsules at some point in the future.)

So we see some different balancing actions across many actions.

Balancing the bitterness of some herbs with sweet and sour flavors.

That is why, if you read our reviews on Athena you’ll see a wide range of benefits.

I’ve been using this for about 2 years now, it’s helped me so much! I was diagnosed with fibromyalgia about 16 years ago, muscles always very, very sore to touch. About 3 months after I started using this my husband started rubbing legs one day and it hardly hurt, he was shocked because I would usually practically scream with pain when he would try to rub my muscles and that day I didn’t even flinch. He was questioning what and why I wasn’t so sore, I told him I started using this, it was the only change I had made and he said then don’t quit! I still have pain but has been reduced drastically! – Beth Rager

This product has helped with my mood swings , energy levels and focus. I use a teaspoon a day. – Michelle E.

It has helped me substantially to balance all my needs as a woman. – Virginia Talamo

As always, nothing works for everyone, but I regularly recommend to women who are getting started with herbs to try this out and see what it does for them.

Logan Christopher is co-founder and CEO of Lost Empire Herbs, which aims to bring performance herbalism into everyday people’s lives. He started studying plants and fungi as a result of his interest in peak performance and strength training. This includes performing feats of strength such as pulling an 8,800 lb. firetruck by his hair, supporting half a ton on top of himself in a wrestler’s bridge position, and routinely ripping decks of cards in half with his bare hands. After visiting the Amazon rainforest, he received a calling to be an “Emissary of Nature” and thus bring humankind back into alignment with nature for health and well-being. You can read more about this in his book Powered By Nature.

Hair Changes With Age: What You Can Do to Look Your Best