Endothelial Dysfunction – could our exercise choices be to blame?

The arteries and veins in our body cover approximately 100,000km, which accepts over 6,700 litres of blood per day. Each artery resembles a tube consisting of three tissue layers. The outer layer is called the adventitia and consists of connective tissue and blood vessels that supply the walls of the large arteries. The middle layer is called the media and is made of elastin, collagen and proteins, while the innermost layer that makes contact with the blood is called the intima. The three layers of the artery form the lumen, which forms the arterial opening that the blood flows through.

The endothelium is the inner lining of the intima responsible for the vasodilation and vasoconstriction of the blood vessel, regulation of vagal tone, promotion of vascular changes, the control of inflammation and increases in the production of nitric oxide.

The endothelium covers all the internal surfaces of blood vessels, cardiac valves and other internal cavities. Any imbalance in these functions renders a condition called endothelial dysfunction caused by the unavailability of nitric oxide (NO), an increase in free radical production and an increase in endothelial activity. The endothelium is regarded as the ‘diva’, as it is responsible for every activity within the blood vessels.

Any damage to the endothelial wall is a starting point for atherosclerosis (narrowing and hardening of the arteries) and/or cardiovascular disease. Damage to the endothelial changes the vessels’ dilation responses and anti-clotting mechanisms, and produces ongoing adverse structural changes. Other risk factors associated with endothelial dysfunction include smoking, obesity, diabetes, hypertension, oxidative stress, high cholesterol levels and sedentary behaviour.

Nitric oxide is important as it has anti-hypertensive, anti-thrombotic and anti-atherosclerotic properties and causes an increase in blood flow through vasodilation (opening). Inactivity decreases nitric oxide to the vessels, increasing inflammation and contributing to atherosclerosis and endothelial dysfunction. Overall physical inactivity causes a pro-inflammatory response while physical activity causes an anti-inflammatory response.

Alternatively, physical activity causes positive changes in nitric oxide (NO) production, up-regulation of the NO gene, increases in vascular endothelial growth factor and an increase in the antioxidant defence system. Consequently, major changes in endothelial function are subject to the availability of nitric oxide, which is primarily responsible for the vasodilation and vasoconstriction qualities of the tissue through the release of acetylcholine.

While the benefits of physical activity such as changes in blood pressure, blood lipid profiles and glucose metabolism are widely known to improve endothelial performance, the exercise intensity to improve these components is still open to debate.

A study of older females who exercised at a low intensity five days per week for three months reported an increase in nitric oxide concentrations, supporting the idea that low levels of intensity can produce favourable changes in the vasodilation and vasoconstriction of blood vessels reducing the risk of cardiovascular diseases.

If nitric oxide formation is interrupted, vasoconstriction (narrowing) of the blood vessel occurs. If the amount of nitric oxide remains low in the blood vessels, there is a reduction in blood flow to the inner lining and the formation of a coagulation, or eventually a clot or thrombus, damaging the arterial wall and predisposing the body to the onset of cardiovascular disease. Endothelial dysfunction is regarded as the beginning of cardiovascular disease, with damage to the endothelium changing the vessels’ vasodilation (opening) responses and anticlotting mechanisms, and producing ongoing adverse structural changes.

Blood flow is also regarded as a potential problem in damaging the endothelium of the arteries. Blood flows generally through the arteries in a forward direction; however, not all arteries are straight and pliable. Many arteries are crooked and branch off and divide through the tissue. Imagine being on a float on a wild water ride, coming down from a height through a long straight tunnel and then hitting a steep curve with force. The float is moved from side to side and then rises up on the edge of the large tube, increasing the pressure on the float and the tube. This is what can occur when blood is forced through blood vessels at great speeds to distribute blood to the areas requiring additional oxygen.

Long-term high-intensity exercise can cause greater turbulent movement of blood through some of these convoluted arteries and can contribute to nitric oxide changes and damage to the artery wall. Initially the endothelium of the artery begins to change its shape to protect itself; however, if continual turbulence occurs and increased shear forces are created, the endothelium will start to work against itself by building up more plaque. Plaque appears in the arteries where the pattern of blood flow is most complex, such as carotids in the neck, femoral arteries in the thighs and cerebral arteries in the brain amongst the most vulnerable.

The current research suggests that high-intensity exercise that is beyond the capability of the individual can result in a reduction in the production of nitric oxide in the walls of the artery, potentially initiating adverse changes leading to atherosclerosis or hardening of the arteries.

Alternatively, if we spend too much of our time sitting, the problem with the convoluted arteries becomes an even bigger problem. Prolonged sitting requires the knees to be bent, the hips to be flexed, the spine moved forward and the head slumps forward, all of which creates more convoluted and bent vessels within the arterial system. This is made worse by the wasting of muscle tissue and a decrease in blood flow to the areas of the sitting or sedentary body. Inactivity creates a smaller stimulus that reduces nitric oxide response, while the higher intensity activity (70-80% VO2max) results in low levels of circulating antioxidants causing an increase in reactive oxygen species and a reduction in nitric oxide, both leading to arterial vasoconstriction.

The damaging changes to the endothelium during both high-intensity activity and sedentary behaviour can cause endothelial dysfunction through increased oxidative stress, inflammation of the lining and erosion of the cells and the vasoconstriction of the vessel and the insufficient supply of nitric oxide. The increased oxidative stress can be caused by the release of Reactive Oxygen Species (free radicals), namely superoxide and oxidated low-density proteins (LDL) that reduces the amount of nitric oxide. These free radicals cause the deactivation of the endothelial receptors responsible for the production of nitric oxide that stops the endothelial cells from dilating, potentially causing a build-up of plaque and a narrowing of the vessels. The limited supply of nitric oxide appears to occur at each end of the intensity continuum.

Diet, smoking, genetics, sedentary lifestyle, alcohol consumption and the shape of the artery, as well as the intensity of movement, can affect the endothelial tissue of the artery.

Physical activity must be progressive in nature. Programmes should start at the lower- to moderate-intensity levels, building to the high-intensity training methods. Some unfit, overweight, older and/or younger clients can be placed at risk without a progression to high-intensity physical activity. When training clients, you have a ‘duty of care’ to ensure a safe exercise environment by regulating intensity according to the fitness and health status of the individual.

Where to next? Find out How Gene Assessments will Revolutionise our Roles. 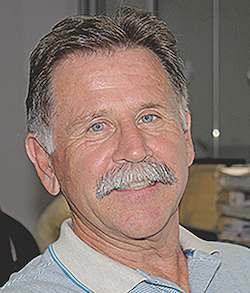 Dr. Paul Batman has worked in health, fitness and sport for over 40 years. Originally a Physical Education teacher and then an Academic lecturing in Exercise Science at Australian Universities for over 20 years and for the last 18 years as owner and operator of two successful Registered Training Organisations (Fitness Institute Australia and Australian College) specializing in developing and delivering vocational educational courses in health, fitness and sport to thousands of fitness professionals.

For over 25 years Paul has presented at international conventions in Australia, Canada, United Kingdom, Singapore and Malaysia and conducted lectures, workshops and in house presentations in many countries throughout the world.

In 2012 Paul was awarded a Lifetime Achievement Award for his services to the Australian Fitness Industry, inducted into the Australian College of Physical Education Hall of Fame and recognized as an Institute Scholar at the International Institute for Sport and Human Performance, University of Oregon.