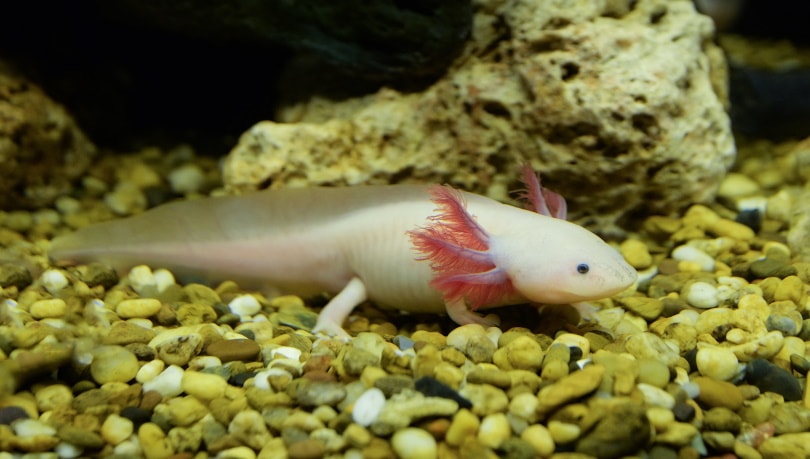 Also known as the Mexican walking fish, axolotls are unique creatures that have been seeing a large spike in popularity as pets recently. Their ever-smiling expressions endear many to these aquatic salamanders, though that’s far from the only unique feature the species sports. They come in a wide range of colors, including whites, reds, greens, browns, and blues, making them a colorful resident in any aquarium. But these amphibians aren’t big swimmers. Instead, they tend to walk around on the floor of the aquarium, so they do require ample space.

Many pets catapult in popularity at some point, even if they aren’t the most easy-to-care-for or enjoyable pets. But what about the axolotl? Are they great pets, or is this another fad of the pet industry?

Axolotls start life pretty small, and if you purchase a juvenile, you won’t need a very large aquarium to start with. Ten gallons should do it. However, these salamanders don’t remain small for long. By the time your axolotl is fully grown, it could be 12 inches long! Naturally, such a large specimen would be cramped in a 10-gallon tank, which is why 20 gallons is the minimum recommended tank size for an adult axolotl.

Your axolotl will require a large tank with plenty of walking room on the bottom and ample filtration. Usually, filtering the water in an aquarium is easy, but axolotls prefer still water, so you’ll need a special filter to avoid creating a current in the tank. But axolotls are known for producing outrageous amounts of waste, so you’ll also have to replace 20% of the water every week to keep everything clean.

Since axolotls spend their time on the floor of the tank and rarely wander to the upper levels, the substrate you choose will have a major impact. Sand is generally considered to be the best substrate. Avoid aquarium gravel as it can easily be swallowed and cause compaction.

In addition to the substrate, you’ll need to provide plenty of hiding places for your axolotl. You can use plants, logs, rocks, and more. Just make sure that you leave lots of areas for your axolotl to feel hidden and safe.

Caring for an Axolotl

It’s not too difficult to care for an axolotl. Water conditions are the primary concerns. Aside from weekly water changes and sufficient filtration, you also have to consider the hardness of the water, its temperature, and even the pH level. If your conditions are off, your axolotl will suffer.

If you’re used to pets that require daily feeding, then feeding an axolotl will seem simple by comparison as they only need to eat two or three times each week. In the wild, these amphibians eat a diverse carnivorous diet that consists of fish, snails, insects, and other amphibians. For axolotls in captivity, brine shrimp, earthworms, and bloodworms tend to be the best feeders since they’re high in protein, readily available, and axolotls will eat them without hesitation.

While there are other feed options available such as feeder fish or even small mammals like mice, these are generally shied away from for pet axolotls. They can introduce parasites to your pet’s tank, which could cause health problems. Your axolotl will definitely eat these foods, but it’s probably more risk than it’s worth.

To feed your axolotl, simply use a long pair of forceps and place the food in close proximity to your pet. Once it spots the meal, your axolotl should take care of the rest.

One reason for the explosion in popularity of keeping axolotls as pets is that they’re very enjoyable to view. These amphibians tend to notice when they’re being watched, and they like to put on a show, suddenly becoming even more active for the audience.

These are considered to be rather docile pets. Your axolotl will rarely show aggression when left on its own. However, they’re unsuitable for cohabitation with anyone or anything. Even another axolotl in the same tank could spell dire consequences. They’re likely to fight, with loss of limbs or life as a likely result. Luckily, axolotls can regrow their limbs, but it’s still not a situation you should create. Other fish or aquatic creatures will likely be attacked, eaten, or killed as well. So, axolotls should always be kept in their own tank, away from other creatures.

Even though they’re amphibians, you should never remove your axolotl from the water. In truth, you should never handle it at all. Instead of bone, an axolotl’s structure is made from cartilage, so they’re not the most durable creatures. Handling one can easily lead to damage. If you must remove an axolotl from its tank, then you should use a mesh net and immediately place it in another water tank.

Getting an axolotl isn’t like purchasing a goldfish. Your axolotl will be around for quite some time. On average, they tend to live to about 10 years old in captivity. That said, some specimens manage to stick around for 20 years or better. Even though this is rare, it’s a possibility you should be prepared for if you’re going to purchase a pet axolotl.

We’ve covered a lot of information about axolotls, but the question still remains: are they good pets? As long as you understand that axolotls are more of a watch-and-observe type of pet rather than the type you might interact and play with, they make excellent pets. They’re fun to watch, adorable as can be, and easy to care for. If you can get the water conditions right, then there’s not much left to worry about. Feeding axolotls is easy and cheap, and these pets live a very long time in captivity.

Nicole is the proud mom of Baby, a Burmese cat and Rosa, a New Zealand Huntaway. A Canadian expat, Nicole now lives on a lush forest property with her Kiwi husband in New Zealand. She has a strong love for all animals of all shapes and sizes (and particularly loves a good interspecies friendship) and wants to share her animal knowledge and other experts’ knowledge with pet lovers across the globe.