Complaint Letter: What is it & How to Create it? (With Examples)


In a perfect world, we would never be let down by a product, service, or company.

Unfortunately, we don’t live in a perfect world. We’ve all been dissatisfied, if not downright angry, by a product or service at some point in our lives.

The blender does not blend. The flight gets delayed and totally ruins our vacation. OR the washing machine turns out to be faulty. Things happen.

And when you face issues like this, even though it often seems easier to remain silent, you can’t just sit back. If you don’t complain, the person at fault won’t even know that the problem even exists.

What you can do instead is make a little effort to pen a complaint letter.

A complaint letter is basically a place where you can air your disappointment and seek a resolution. This letter can result in better service for everybody.

But you can’t just rush into writing a complaint letter because that will only make the complaint process longer and more painful. You need to put some forethought and preparation into it.

Because if your complaint letter isn’t strong, it will disappear into a black hole, and things will stay the same – the way they’ve always been.

So, read on and learn everything you need to know about writing a complaint letter that actually works.

First Off, What is a Complaint Letter? (Definition)

What happens if something goes wrong with a product or service you paid for? You write a complaint letter.

When the reality falls far short of expectations, writing a complaint letter is one of the first steps you can take to let the company know you have an issue that needs to be addressed.

But here’s something that you need to understand: complaining without an intent to help or affect change is just whining, and no one likes a whiner.

Also, it is extremely easy to get lost in your emotion because you keep thinking about the bad service that you received. But if you want to win the battle, you’ve to stay calm and stay rational while writing your letter.

Even though there are no magic words, there are a few tips that’ll make your complaint letter the way it should be.

1. Cut Right to the Chase

When drafting a complaint letter, don’t just ramble on and on before getting to the point.

Sorry but the recipient doesn’t want to read your sob story. You don’t need to write a long, rambling letter at all. Keep it as short as possible and stick to the facts.

For instance, if your complaint is about a delayed airline flight, don’t start talking about the extra baggage fees that the airline charges. Focus on the delayed flight.

A one-page complaint letter is the best. It’s not too short, so it’s easier for the reader to understand what you’re trying to say. It’s not too long, so it won’t waste anyone’s time.

Your complaint won’t be resolved if it doesn’t end up in the hands of someone who can resolve it, and having to send a complaint letter several times before it reaches the right person can be frustrating.

So make sure you approach the right people from the get-go – whether it is the customer services department or the managing director. You can’t chat to the shelf packer about the quality of the dairy products, right?

If you’ve faced a major issue, you might want to send the letter to someone higher up. If your complaint is against a small business, it’s better to talk to the owner directly.

They will be more used to dealing with complaints and provide a more satisfactory response. Just do a quick search on the internet to find their names and other information, and then address the letter to them.

Why set a time limit?

Well, it stops your letter from getting thrown into the backburner, and it gives you a solid foundation for a follow-up letter if you don’t get any response. Nifty, right?

Also, companies receive many letters every day, and because of the backlog, most companies will take a look at your letter a few days after you send it. So, setting a time limit is a good idea.

Don’t forget to mark the date on your calendar as a reminder of when you need to follow up.

More often than not, when we choose to make a complaint, we’re unhappy, annoyed, and frustrated.

And, when heated, it’s very tempting to write an angry or threatening letter, but ranting and rambling on will get you nowhere. Rants are ugly.

Not to forget, no one likes it if someone approaches them and starts calling them names. Companies are no different. So, always, always be calm.

Keep your emotions and the snarky comments to yourself. Do not insult or write in a belittling tone because it will kill your arguments, and the reader won’t feel like you’re being objective.

Keeping calm is step one and being polite, kind, and keeping things courteous is the ultimate goal. Keep this old saying in mind: you catch more flies with honey than with vinegar. 🙂

Before you start writing your complaint letter, be very clear about why you are complaining and what exactly do you expect from the company.

Stick to the pertinent facts and do not go off into the deep end with tangential commentaries on the company. We mean, don’t just say “You guys suck!”.

Focus on one primary goal: stating what went wrong as factually as possible, and the resolution you expect.

For instance, if they delivered you a defective product, mention whether you want it to be repaired, replaced, or you want to get your money back. Plain and simple.

Now let’s put all the tips we’ve given you together and see what a solid complaint letter looks like in practice!

Read more: Proposal Letter: What is it & How to Write it?

Complaint Letter Examples That Check All Our Boxes

I am Jake Blair and I’m writing this letter to complain about receiving a damaged microwave from your company. My order number is XZY67006.

On 21st May 2021, I ordered a microwave through your mail order catalog. I received it on 25th May 2021 and after opening the package, I found that some parts of the Microwave were missing and it had dents on it.

I have been a customer of your company for the past five years and this experience has left me disappointed. I’d like you to take this damaged microwave back and replace it with a new, working one.

If you don’t have the product in stock, please refund my amount for the same.

I, Carrie Jackson, would like to file a complaint about the poor WiFi service provided by your company. The WiFi hasn’t been working properly for the past one week and the speed is extremely slow.

Since I work from home, I’m not able to do any of my work because of network issues. I have raised the complaint so many times but I haven’t received any resolution yet.

I request you to please resolve this issue on a priority basis or else I’d have to stop using your services. Also, I’m not going to pay for the connection until and unless the problem is resolved.

Your fingers are thumping the keyboard as you’re pouring all your rage out.

At this time, taking care of the format and design aspect of the complaint letter is obviously something you’ll put on the backseat. We totally understand.

But, that doesn’t change the fact that the way you present your complaint letter is important. After all, that’s the first thing someone would see when they open the letter.

Don’t worry, taking care of the presentation aspect of your complaint letter doesn’t have to be a pain at all. There’s a platform out there that can do all that and more for you.

Bit.ai – The Platform That Helps You Create a Powerful Complaint Letter

Writing a complaint letter is not a walk in the park. It takes so much of your time that you end up having no energy to make it look appealing.

Well, Bit solves that problem for you by automating the design aspect for you. With over 90 pre-built, fully responsive, and gorgeous templates, Bit has made the entire process of creating documents super smooth. Just pick a template that fits your needs the best, and you’re good to go!

What’s more? Well, with just one click, you can change the look of your entire document. You can even change the layout of the theme and update the color of your document.

The best part is, Bit lets you add videos, social content, music, maps, charts, surveys/polls – basically any rich media you can think of in your document. That means you can make your complaint letter much more comprehensive by including proof of why you’re complaining.

For example, if you received a defective product, you can add a video or an image of it in your Bit document and then send it off. That’ll have a much, much larger impact than just explaining it in a few lines.

Ready to write a complaint letter using Bit.ai? We know you are!

Writing a complaint letter may feel a little bit old-fashioned in the digital age, but sitting down and penning a letter shows that you’re truly dissatisfied and leaves a greater impact.

Even though it is not always the easiest thing to write, simply asserting the facts and stating why the company should help you is enough.

And, always remember the three P’s while writing a complaint letter:  patience, persistence, and politeness. These will raise the chance of you getting the kind of response you want!

If you’ve got anything to ask related to Bit.ai or complaint letters, hit us up on Twitter @bit_docs!

Leave of Absence Letter: What is it & How to Write it?

How to Write an Unavoidable Job Offer Letter?

Invitation Letter: What is it & How to Write it Perfectly!

Two Weeks Notice Letter: What is it & How to Write it (With Examples)

Internship Cover Letter: How to Write a Perfect one? 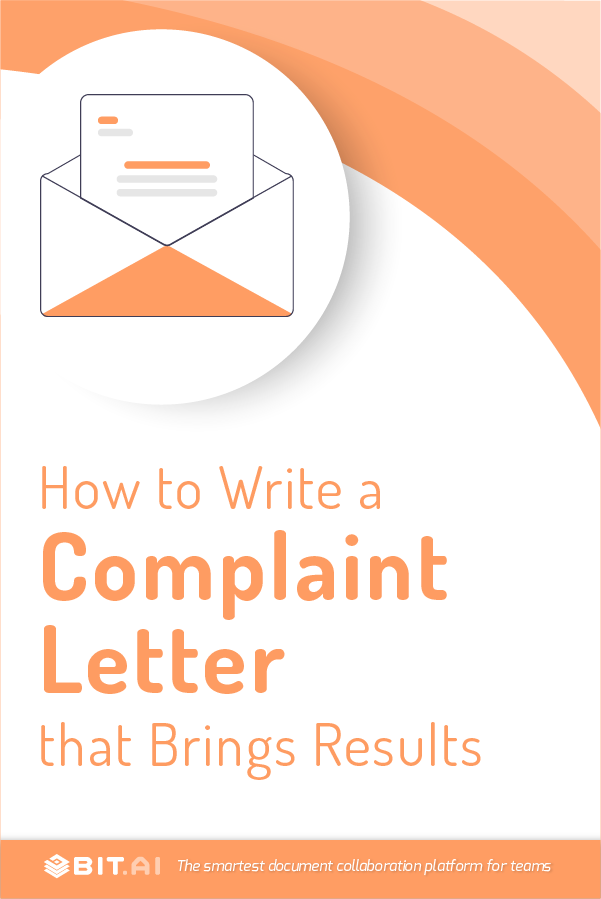 The Ultimate Guide to LinkedIn Groups