Another step on the road to graphene mass production 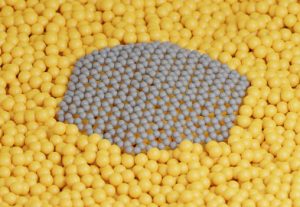 Growth it on liquid catalyst shows promise, as the liquid surface is naturally flat, and devoid of crystal structure that can encourage periodic defects in the graphene.

Furthermore, it might be possible to float or peel fresh graphene from the liquid surface, side-stepping distortion problems caused as two dissimilar materials cool in intimate contact, and removing the need to etch catalyst away to free the graphene.

Liquid copper is a promising substrate, on which graphene grows rapidly, and work is underway to create a recipe that predictably forms large even graphene crystals exactly one atom thick, and to find away to remove them in-tact.

To take the guesswork out of this, growth needs to be studied microscopically as it happens – tricky at the best of times, and a real headache on a liquid at over 1,000°C.

“This has allowed us to control graphene growth parameters such as shape, dispersion, and the hexagonal supra-organisation with very high accuracy. Furthermore, the switch from continuous polycrystalline film to the growth of millimetre-sized defect-free single crystals could also be accomplished,” according to ‘Real-time multiscale monitoring and tailoring of graphene growth on liquid copper’, a paper on the technique published in ACS Nano.

This work is being used to validate and calibrate a parallel project by researchers at TUM who have been using the JUWELS and SuperMUC-NG supercomputers at the Jülich Supercomputing Centre and Leibniz Supercomputing Centre to simulate how graphene forms on the surface of liquid copper using molecular dynamics – which should reveal processes that are not experimentally observable.

The simulations are of such high resolution, that it took over a month to model around 1,500 atoms for picoseconds on ~2,500 cores in JUWELS. These results have been published in the Journal of Chemical Physics.

“The problem describing anything like this is you need to apply molecular dynamics simulations to get the right sampling. Then there is the system size – you need to have a large enough system to accurately simulate the behaviour of the liquid,” according to TUM theoretical chemist Mie Andersen said. “In this research, there is a great interplay between theory and experiment.”

Graphene is used in electronics and photonics. The best quality material is still flaked from blocks of graphite using sticky tape.

Image above: A simulated moment of graphene growth, revealing that it forms in rather than on the copper surface.

iOS 15 revealed at WWDC 2021: Here are the features coming to iPhone this year