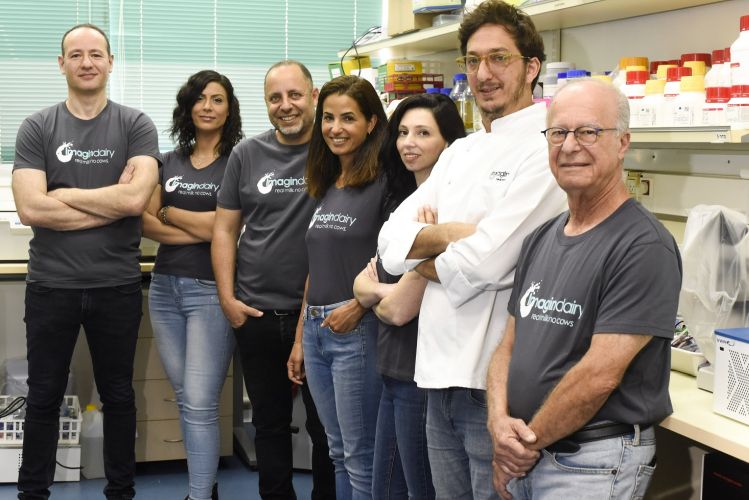 Berkeley, CA-based Perfect Day​​ – which is already supplying several companies with animal-free whey protein – is the best known (and funded​​) player in this emerging space, while Change Foods​​ and New Culture​​ (San Francisco, CA), Remilk (Israel)​​, Formo (previously Legendairy Foods in Germany) ​and Those Vegan Cowboys​​ (Belgium) have also emerged from stealth mode over the past couple of years.

“Our go to market strategy is B2B. We believe that the best way to move forward and introduce the world to animal free products is through strategic collaboration with dairy brands. We will work with dairy companies to develop animal free dairy products with the same familiar taste of traditional dairy products.”​

He added: “We were approached by global and local dairy companies, but I can’t disclose their names.”​

Whey proteins to hit the market within two years

He added: “We are targeting the US market first, we are expecting to launch our first product ​[animal-free whey protein] within two years. As for regulatory pathways, the first step would be to submit GRAS notification to the FDA ​[something Perfect Day has already done for its animal-free whey protein, produced via the fermentation of a genetically engineered strain of the filamentous fungus Trichoderma reesei​, receiving a letter of no objections​​ in March 2020].”

Asked if Imagindairy can make all of the above proteins via microbial fermentation, Dr. Abo said: “Precision fermentation in general and our proprietary technology in particular allow us to produce the full range of milk proteins. We can make all six but decided to focus first on whey proteins.”​

Casein proteins, when produced by cows, fold up into a spherical ‘micelle’ structure so that the proteins can remain suspended indefinitely in the milk water. So if you are making casein proteins individually using microbes, can you induce the formation of micelles? And do you need all four casein types to do this?

“Single casein will not be sufficient to produce curds, therefore it will [be] require[d] to produce at least two caseins… Secondly, caseins’ organization in small particles (micelles) is essential for its functionality and may be hard to achieve  in microbial expression systems, while caseins’ functionality may be affected by specific modifications such as phosphorylation that are not present in microbial systems.”​

Were a ‘milk’ to be launched, in partnership with a dairy or CPG company, said Dr. Abo, “We will produce only the milk proteins in a microbial system and supplement them with a non-lactose sugar source, plant based fat, minerals and vitamins.”​​

So what does Dr Abo believe will ultimately distinguish the winners from the losers in the emerging ‘animal-free’ dairy space?

According to Dr. Abo, “Imagindairy is the only company in our domain with the required technology to successfully address the industry bottleneck of high production costs. Our technology is based on 15 years of research by a world leading research group led by Professor Tamir Tuller, Imagindairy co-founder and CSO​ [Prof. Tuller works in the biomedical engineering department at Tel Aviv University].

“We are channeling evolutionary genomics for the advancement of high yield protein production. We are able to optimize every step in creating milk proteins, which has allowed us to achieve the yield that is needed to achieve commercial production.” ​

“Our microflora-based production method was inspired by nature to recreate these ​[dairy] proteins​,” said Dr Afergan, who believes that plant-based dairy alternatives do not have the nutrition, functionality or sensory qualities of real dairy products.

“Our vision was to deliver an animal-free version of the primary dairy proteins — whey and casein — that can allow product makers to match real dairy products in terms of protein concentration, nutrient profile, and the full sensory experiences of the animal-derived versions.”​

Speaking at an online demo event​​ organized by the Kitchen FoodTech Hub​​, the start-up incubator owned by Israeli food giant Strauss Group, in February, he said: “Our technology – protected by three patent families – is proven to increase protein production yield by up to 200 times compared to existing technologies.”​

Imagindairy​​ (strapline: ‘real milk. no cows’) has raised $1.5M in a seed funding round led by The Kitchen FoodTech hub (part of leading Israeli food and beverage company Strauss Group), with contributions from the Israeli Innovative Authority, CPT Capital, New Crop Capital, and Entrée Capital, and will soon launch a Series A round. It was co-founded by a multidisciplinary team with expertise in microbiology, computational systems, and biotechnology last summer.

55 Things Under $30 We Absolutely Effing Love