3 Alaskan Dog Breeds that Originated in Alaska (with Pictures)

When most people think of Alaskan dogs, they probably imagine the Alaskan Husky. This is one of the more common breeds of dog in Alaska, where people relied on sled dogs to get around until only a few decades ago.

However, there are also other breeds of dog native to Alaska. As you might imagine, many of these are used as sled dogs. In fact, two of the three breeds in Alaska are used to pull sleds in some way. Generally, the dog breeds from Alaska were bred to survive the harsh climate there. Most have thick coats and are pretty energetic.

This large breed of dog was originally bred as a heavy sled dog. They were bred to haul heavy freight, which means that they had to be big and strong. These dogs can weigh up to 85 pounds, though females are typically smaller. Some dogs over 100 pounds have been seen. Like most Alaskan breeds, these dogs have a double coat that can be as thick as 2 inches.

Malamutes are still used as sled dogs today, especially when heavy loads need to be carried. They are also family pets. They have a high prey drive, which can make a living with smaller animals difficult. This includes other dogs, especially small breeds. They are very fond of people and prefer to be around people as much as possible. They are great house dogs as long as they meet their exercise needs. They are quiet dogs and tend not to bark.

These dogs are very healthy and live up to 15 years. There are few health problems known in this breed. There are some occurrences of hip dysplasia and cataracts. They are also known for seizure disorders, which are found in puppies and adults alike.

The Alaskan Husky is a lot like the Siberian Husky, but there are some key differences. This breed is a mongrel breed. In other words, they are not officially recognized. Instead, they’re more like a hog-pog of many different breeds. Both the Alaskan Malamute and Siberian Husky contributed greatly to this breed. However, the Alaskan Husky has also experienced a century of crossbreeding with English Pointers, German Shepherds, and Salukis. Most of this breeding has been to improve the performance of the breed for pulling sleds in Alaska.

These breeds look much different from the Siberian Husky. However, they at quite similar.

There are many Alaskan Huskies that are actually part Greyhound to improve their speed. There are actually two distinctive bloodlines of this breed – one built for sprinting and another for long-distance runs.

This is a spitz-type breed that was bred to be a companion-sized dog of the Siberian Husky. They look a lot like a Siberian Husky, but they are much smaller. Their weight ranges from 5 to 22 pounds as an adult, with the females being the smallest.

Typically, these dogs are curious, agile, and intelligent. They can be stubborn, likely due to high intelligence. They excel at agility. Their thick bones allow them to withstand high jumps.

These dogs are generally healthy. However, they were developed under a rigorous breeding program, which means they do have some genetic predispositions. They are prone to juvenile cataracts, liver disease, and heart problems. They are a decently new breed, so we may not understand all the diseases they are prone to. 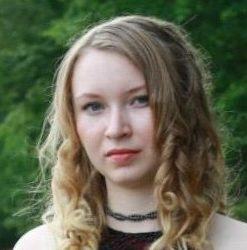 Kristin is passionate about helping pet parents create a fulfilling life with their pets by informing them on the latest scientific research and helping them choose the best products for their pets. She currently resides in Tennessee with four dogs, three cats, two fish, and a lizard, though she has dreams of owning chickens one-day!